FOUND IN THE TRASH 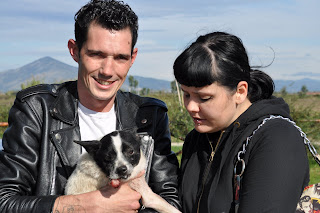 Stephen and his wife found a chihuahua mix on a garbage bag by the side of the road. They took him in to a veterinarian because he has a growth on his lip that turned out to be cancer. The vet said 160 euro to put him down or 200-300 euro for surgery. But the vet didn't do an examination, it was just cold fact. 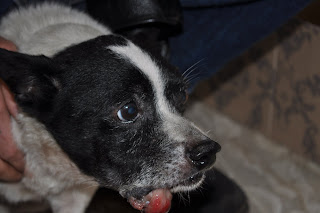 Through a co-worker/friend, Keegan, they contacted AWL and asked if there were anything we could do? Pogge (sp?) is a warm-hearted, happy dog. He eats wet can food, and snuggles and plays. He has been someone's pet before. They believe he was dumped, and some vets have told me that can be the truth in many cases, since it is expensive to put a dog to sleep or surgery. Owners will cast off a sick or injured dog, rather than paying either price to do the right thing. 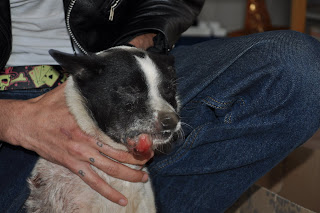 The second vet said they could not do a surgery as it was too difficult because the cancer was on the lip. He was rude, even people in the room reacted over how they got treated (the dog and couple).
The couple was upset. Even if they haven't had this dog since puppihood, they have become very attached to him. When you are attached to something you don't want people to be "cold". So off to the third and last veterinarian, and this afternoon I expect to have a call, "What to do with Pogge!"

AWL thanks Stephen and his wife for stopping, bringing him in and doing what's best for Pogge.
Keegan for being the middleman, guiding them to us. Jackie, for the towels that help Pogge relax in and dry off the blood from his mouth.
You guys are wonderful, you've got your heart were its supposed to be. AMORE

Posted by Mother in Action at 8:57 AM