THE LAND OF PAIN 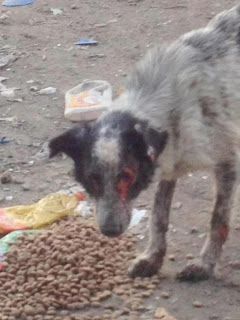 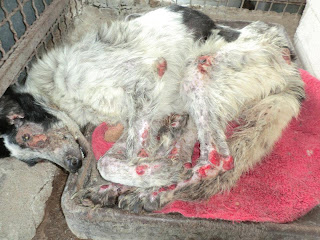 Above picture is from the beach when she was free eating from out-spilled dog food. To the right is the same dog 2 weeks later. 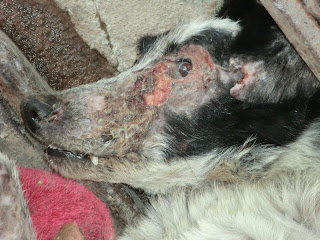 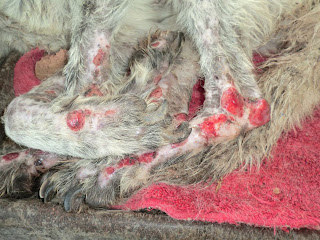 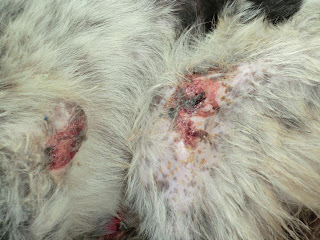 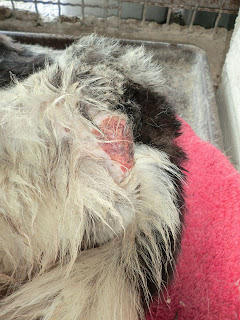 I want this story never to be forgotten. I want that Cally’s name and memory shall continue to shine on we humans over what we do to the poor souls in need, and what we do not do by turning our gaze away. Cally was roaming around on the beach, very sick but trying to survive. People saw her and tried to catch her but she was very shy. A lady with her shelter with 400 dogs caught her and took her in to a cage with concrete floor, put a red little carpet under her. She was sick, very sick. The veterinarian that they took her to -- they told us,-- proscribed antibiotics and glucantime but she didn’t respond, quiet the opposite, she became worse. One of our AWL volunteers --- Chiara ---  went to this shelter to visit a dog she has in there. She saw this female lying with a lot of wounds. Chiara took pictures and published on FB and I was contacted. It was with horror I viewed the picture, the pain went through my veins. I could nearly not breath. My volunteer Martina and I started the rescue plan, we knew we could make it. And in six hours we got a plan. I spoke to our veterinarian Dr Damiani and sent the picture I had received, Martina contacted the lady and told her to bring the dog that we named Cally. Martina and I agreed that after she had stayed at Dr Damiani’s clinic we could transfer her space in the hospice, if she was well enough. We didn’t want her to suffer, and we told our reliable veterinarian he had free reign to do what was needed. We also informed the lady that if Cally had to  --- or wanted to --- go to heaven, the lady had to let her go.  The next day the lady brought her into the clinic and our veterinarian was upset at the condition Cally was in. She was completely unconscious, unable to stand and walk , breathing heavily, (called  Kussmaul breath) Cally decided to breathe her last breath only fifteen minutes later on the cold examination table. Our vet believed she was in severe chronic kidney failure. If the underlying cause was leishmaniosis, in such an advanced stage, he doubted they could have saved her life.I was in tears like many other people were. We were many that fought for her from America, Sweden, Germany and Italy. People followed her on the FB and donated money. We were not upset about her passing away, we were upset that she had been sick for this time and we found her too late.  That perhaps she suffered needlessly.Instead of showing our anger towards people We want to turn the table around, We know that Cally would have wanted us to do that. She never got to have a family, she never got to lie in a warm bed and be treated like a Queen, she never got a quiet death, it was pain and suffering.She no longer suffers, let us show her that we care and we will continue to fight and save lives in her name. The money that was donated under her name and during these two days is frozen/earmarked  “CALLY FOUND”. When we find another soul in emergency need we will use this money in her name. That’s Amore.

Thank you everyone involved for your hard but amazing quick work.


Our Cally Sponsors thank you we still have the money in your name.


We got 658 euro earmarked Cally Found.

Posted by Mother in Action at 8:17 AM