THE POWER OF A DOG~THANK YOU CREATURE 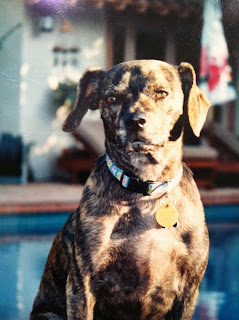 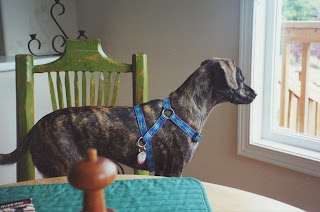 The Power Of A Dog – Thank You Creature

Creature left us after a wonderful life. We say “left us” vs. “he is gone” because it is we who are left with a big void. He now joins Vinnie, Gus and other eternal pals.

He came into our lives as that “cute puppy with all that brindle” found running around abandoned in parking lot with no home. At the time we had no plans to have a dog, but there he was wiggling his butt into our lives. He didn’t look like anything in particular, just one of God’s creatures, so Creature became his name. And from that moment on this very special dog worked his magic.

Creature changed our lives. The years of volunteering with animal rescue, the thousand of dollars given to animal groups, staying in the US rather than returning to the UK, and most importantly the rescue of other dogs; Vinnie, Gus, Lizzie and Natalia… all because of Creature’s magical influence.
His charisma, confidence and swagger meant people never forgot him. Dr. Lisa in Malibu would always brighten up and excitedly call his name when she saw him, and he brightened up in return, especially when he saw treats. Years after leaving Malibu he was back walking around the shops and out of nowhere an inquiring voice said “is that Creature?” Someone whose name we didn’t even know remembered Creature.

He had that magnetic quality about him. In his early years the good looks and twinkle in his eyes made him a lovable rogue, a Joe Namath among dogs according to his grandfather. Later on as he greyed he took on the persona of being the George Clooney of dogs.

Happy trails our dear, dear friend. You changed us all, and all of us are so much better for it.

A poem that captures all you and other animals deserve, and will receive, as sure as the sun will rise.

A being pure of spirit
And a being without sin
Is surely one that should be there
But does God let him in?

I could not face eternity
Without paws and tails
And if that's what religion thinks
Then that is where it fails
I hope God doesn't let me down
I'm sure He knows their worth
For we who have been loved by them
Have Heaven here on Earth! 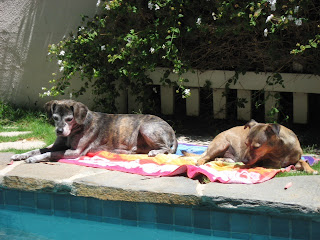 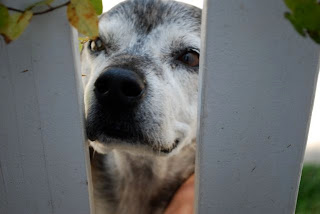