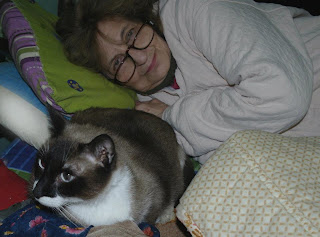 During my monthly visit to Italy, Angy --- one of the hospice volunteers --- and I went to the veterinarian clinic with some of our hospice dogs. It was turmoil of emotional stress since one of our clients was going to be euthanized--- the eternal sleep. Even if Rosita was 19 years old and sick, it became stress since when love is involved it isn´t easy to make that decision (or go a head and say those words). Though it is a gift to be able to give them eternal peace, there are many feelings involved.

When we entered the clinic a man was going out and in his hand he carried a cat in a transportation cage. He stopped me and asked if he could donate some things for AWL. In a hurry I handed him our card and told him where he could leave the donations. I forgot all about him at the same moment I entered the examination room together with Rosita.

We had three other dogs for different check-ups. Angy and I walked out to the waiting room while Dr. Fransesco made the examination room ready for Layla. The man that had left with the cat earlier was now back in the waiting room, again with the cat. I asked our veterinarian what was wrong?

Nothing, was wrong with the cat, he was healthy as a 15-year-old cat can be, but the man´s wife didn´t want the cat anymore. They wanted to put the cat to sleep.

I could see that Dr. Fransesco was conflicted and didn´t want to do it. He had told the man to go home and speak to his wife that there was nothing wrong with the cat. And Dr. Fransesco had hoped the wife could come back and they could talk about another solution. She never came! Instead she sent her husband back and this time he had a book with him if-- he had to sit there and wait to have his cat put down to sleep, however long time it would take.

According to the man, the cat hid from the family --he told us several times-- “what kind of life is that to have a cat?” Upon my question if he had any children, he told us his daughter was 14 years old. What kind of morals do you teach your daughter by euthanizing a cat because he is hiding and making his business outside the cat litter box? “Well she hates the cat!”

“If I was the cat I would hide too if I knew the whole family hated me!” I replied.

He was charming telling us all these negative things about the cat and if we took the cat, we would also get all the cat things they had for him. We were angry, the poor cat Edgar didn´t have any voice of his own and when we open the cat box he looked with timid eyes and a small meow came out. This cat could not be put down to sleep!

More information was filling out to Edgar´s story, they were moving back to the States. More was being added, the owner apologized saying they had had an ad for Edgar on a Navy website but no one had answered. I couldn´t help telling him it was a very positive ad, totally opposite what he had just told the veterinarian. He blushed. I looked at him shaking my head.

He continued, “Well it is my wife who will take care of him she is the one who will deal with this cat while I am gone on a ship for a long time”

A cat that was hiding would suddenly give one person a lot of work after 15 years together!

We couldn´t believe how much he came up with and was obviously scared by his wife (or so he told), they didn´t do this together. I took up my phone and called our great volunteer Marty for help. When I hung up I turned around gave him our business card and told him to donate to AWL as a thank you since we would take care of Edgar. He thanked me several times and it was so hard not to show any anger, instead I said. “You might have a good heart but you sure don’t have any balls.”

1) Did we get any donations? Only the things Edgar had in his home that the owner had promised our foundation before we met Edgar and heard about his story. If I hadn´t overheard the conversation or been there that day, Edgar would have been dead.

2) According to the foster mom Marty found for Edgar, he was adorable and did not hide, nor did he pee or poo outside the box. He just wanted to cuddle all day with her.

We never got any email back from owner thanking or asking how Edgar was doing. When I saw their ad I wrote a message asking why no donations? Answer back: “we hadn´t had time we are packing!”

Yesterday I received an email from Marty that Edgar had passed away. He stopped eating and grieved his lost family --- the ones who callously abandoned him and wanted to put him to sleep for their convenience. The foster mom took him to the veterinarian who confirmed his grief and tried to give him fluid and even give him baby food with a syringe. Edgar´s only wish was to be close to his foster mom and his heart stopped beating out of heartache.

Edgar knew he was unwanted and as children who cannot speak for themselves, he had to express in actions. When not being seen or wanted anymore, a creature´s hope inside blows out like a candle, the pain is overwhelming and the heart and soul wanders away lost by pain.

Two different veterinarians met Edgar (not related or know each other), they confirmed that he was a healthy cat.