Remember earlier on the blog I wrote about Athena and her partner.

Well for Athena it hasn't turned out so very well for. I am frustrated since AWL got a problem that we didn't ask for and we made clear in the begining that we only would help with medical bills. Now, I am so sad because this girl Athena doesn't deserve to sit locked in a cage, she had it great with her freedom. She got fed, she had her partner and most important her freedom. But some people didn't like to see her in an abandoned car--with broken glass--with K9 dogs they practise to walk on smashed car window glass and its not dangerous for their paws.

The "rescuers" saw the scars and thought it was from the car but it was actually from dog teeth, and they were old scars. As you read they were in Rita's garage and Athena defended her bone when her partner wanted to take it. That is so very "normal." I wasn't there when it happened, but those involved were upset and Athena was the one to be blamed. She slept outside in a crate as you can see in the video with her partner in the garage. Many times this sort of interaction between animals sounds worse and we get scared, its like hearing two adults arguing in a different language. Because you don't understand what is being said, it sounds worse than it is. We don't know what the dogs are saying, but it sounds bad. But think about it, if they wanted to kill each other it would have happened already, and how could they live together outside in their freedom with no problems?

Rescuing dogs in distress or bad situations is a nobel thing. But like anything, it should be done with cold calculation, not in the moment of high emotion, or solely with your heart. When rescuing, you have to have many different plans. And, unless you are an expert, why not get advice from someone who knows a lot about strays? I have heard people say "I have had dogs my whole life!" But how many of them were strays you rescued? I have been cooking for 30 years but I am not a chef!

AWL is against putting dogs in shelters and here I am with a dog someone rescued and dumped in our lap. No foster homes, no adoptive homes, we can't take her in. She can't go back on the street, especially without her partner. No donations are even given to help defray the costs, only silence from the rescue people who were so happy on Facebook that they had "rescued" dogs. Where are they now? Where is the "follow-through"?

I was visiting her today and walked her, she is wonderful --- so loving and gentle. It is dangerous when someone starts a rumor that destroys the possibilities for a dog's future. Much the same for when people talk bad about another human, and start unfounded rumors. If you are going to play "rescuer", get the facts straight! I have so many stories about people screwing things up for the animals, and I still get many emails from good people who are being dumped on with others' problems.

What is worse, in Cumberlain County (NC, USA) 800 dogs euthanized every month, or the ones roaming free in Campania, Italy?

So thanks to some "bleeding hearts" who thought it was uncomfortable watching this pair in an abandoned car...look at this picture...this is the result of your actions! 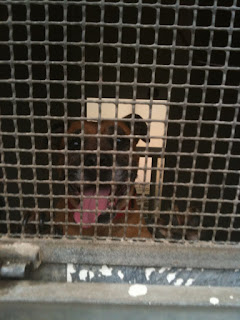 I want to thank Rita who is still there for Athena.
Posted by Mother in Action at 11:59 AM