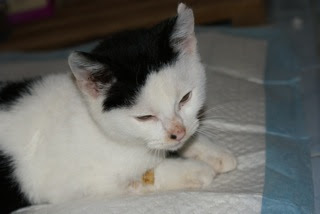 AWL got an e mail from NFOA, asking if we could help find a foster home for a badly wounded kitten? They had gotten a request from the persons that found the cat. The family that found him took him to the vet and then kept him in their bathroom since they had two big dogs that doesn't like cats. This couldn't continue, so they needed help!

Francesco's injures sounded horrible and some thought it would be more humane to put him to sleep, but how could we judge that over some written words (email)? I called our "cat section" AWL Jackie and told her what I knew. Of course AWL wanted to do some research and meet the kitten. 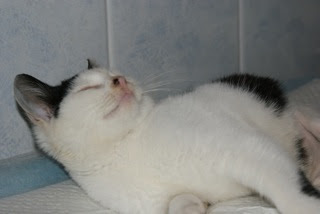 Jackie took care of this case with AWL's support.
This is Francesco. He is a lovely 3-4 month old kitten, he loves being petted, loves his toy and he is very affectionate despite being a stray kitty. He had a very rough start to his young life. He fell from a balcony, was immediately run over by a car, and being so traumatized tried to hide in the engine of a fire truck where he sustained additional injuries! 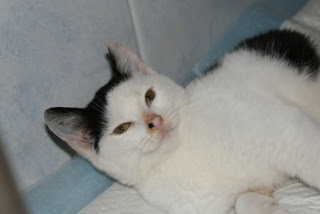 His hind legs were severely damaged and he suffered a dislocated hip. Dr Damiani called him a " Miracle Cat" because not only did he survive this ordeal but is recovering at an amazing rate. He must have his bandages changed every few days, requiring anaesthesia each time. He is able to use the litter box and moves around surprisingly well even using his one bandaged leg to help him get around at his current foster home 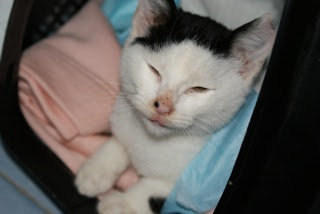 His dislocated hip is not a problem and his prognosis is good for the other injury to his legs. He likely will have very limited use of one of his hind legs. But it's not stopping him from curiously checking out his home with the company of the other resident kitty! He had to be confined initially to a bathroom for his own well being. His new foster family will understand that he must be kept strictly indoors for his own safety. 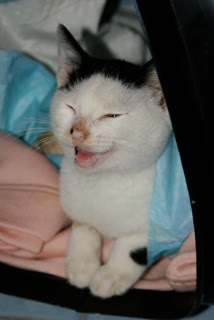 Francesco is a fighter and deserves every chance at happiness in a forever home!

Please help AWL with his medical bills by donating money on our PayPal account. You can make a difference, he doesn't know you but his recovery will tell that there are good-hearted people out there. Some would say its wasted money, or too much money to put on "a stray cat" but for AWL he is a client. We would do it for you, too.