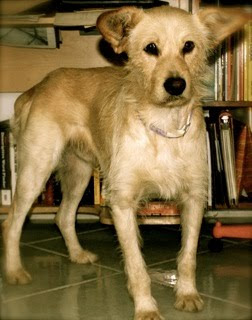 Last night was a scary evening. Julian's foster mom, Rita, called me and said Julian was not doing so well could I come over? On top of everything my phone dies, and I panic! What was wrong?
I ran to my car drove, like a maniac over to see Jake and Rita, holding a very confused, stressed Julian. He had had a seizure, a big one!

I called our vet, who said that we could/should give him Valium. Rita drove to the pharmacy while Jake and I tried to calm Julian down.

My heart broke to see him blind, confused and stressed walking into things and screaming. We couldn't hold him, he was like a slippery snake. We locked him into a cage/crate but he was stressed.

Rita came back and we gave Julian the Valium, and waited....nothing positive happened.
Julian started to cry and howl....before for the past week we had heard nothing from him. I told Rita if in a couple of hours he didn't calm down, to give him more.

He didn't calm down, and more didn't help. Rita and Jake drove him into the Animal ER, where he was taken good care of with an IV if he would get another seizure.

Last night was a nearly sleepless night. I was so worried. I woke up at 0400 hearing myself saying goodbye to Julian. I was scared! I didn't want him to suffer, and I didn't want to put him to sleep because it had been uncomfortable and scary to watch him last night.

Olivia my daughter who didn't know anything about this since she had been with friends the whole evening asked me why I was sad. I never try to pretend, I want her to see that a mom can be sad too. I told her I was sad because a dog was sad. She sat quietly during some seconds and then said to me "Do you want Sister Erica to make him feel better up here?" and she puts her little hand at her own head.

I smile at her, my angel face and nods yes, yes I would very much like that.

Later in the morning I get a message from Rita, Julian is eating and doing fine, he can come home. The vet told them that Julian is a true survivor!

Foster parents Jake and Rita Schneider. Without you Julian would probably not be alive. You saved him and kept doing everything to make this little guy survive. Thank you, this is so much Amore.
Posted by Mother in Action at 1:08 PM