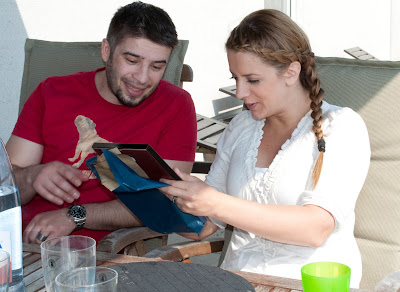 On our recent trip to Sweden, we took with us a plaque for Bobby and Erika, to commemorate their super effort to save and adopt one of Campania's neglected. 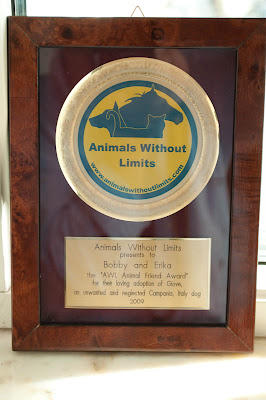 Everyone who adopts a stray or shelter dog is a winner, to be sure. But we felt that Bobby and Erika went above and beyond the call in rescuing Giove.
The story could almost be a movie plot, but it is all true. Erika saw Giove's picture from our "terrible shelter" mission, a picture that Ylva took. Erika fell in love with Giove, somehow through the picture, he spoke to her. She convinced her partner, Bobby, to adopt Giove to live with them and their two other dogs. This pair sent donations and gifts for Giove, and when the time finally came for him to join them, they drove down from Sweden 23 hours to get him. After a few days getting to know him, they drove straight back, another 23 solid hours, and went to work the next day.
Giove is doing wonderfully, as you've seen in other blog posts, along with his two big siblings. He is so gentle and loving... and this a dog that many had said should be euthanized. They didn't know Giove, and they don't know the power of Amore.
Bobby and Erika, are Amore personified. And for that, we felt an award was more than justified.