Giove, You Made It! 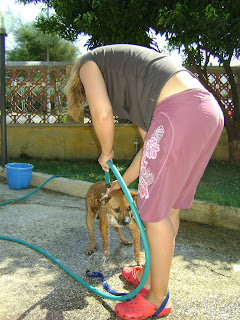 Giove (see the picture from earlier blogs) was trapped for many years in a horrible shelter were he had to drink his own urine many times, and often went without food for days at a time. The lack of food and water happened many times during his time there. He is some kind of terrier mix so many were afraid of him ---still many don't understand that it is often the human that creates the dog's "aggressive" mentality through their interaction with the dog--- and needed surgery for a hernia (surgery provided by AWL). Erika and Bobby sat reading my blog and saw this picture of him trying to reach out from the cage. There was something with this little boy that reached across the kilometers, indeed across Europe, and touched their heart.
They contacted AWL and told us they wanted to adopt him! So the journey began (please read earlier blog stories about him) ---he stayed at another shelter, a little better since they got food every day. Once the adoption was for sure, I moved him to a sort of kennne, where all the shots and tests were done, as well as the operation for his hernia. He stayed there for several months, getting well. For four (4) months he had to stay there until I could bring him to our home for evaluation and socialization. One veterinarian told me to be careful because he would nip! They said "Absolutely no children and he wouldn't get along well with our other dogs."
A little nervously, I have to admit, with 13 dogs and 2 children in my house, I definitely didn't want to jeopardize anyone's safety. But then I have learned from my work (12 years) that people are different, environments are different and dogs minds are certainly different. That's why we test them several times and in different situations. The result after three weeks here; Giove was best friends with everyone in my house, he listened and learned so quickly, it amazed me, and with my children he was polite and gentle (they were never alone with him and we didn't have him on the bedroom floor, it's closed to the dogs to come up). In a car, he was wonderful. Out at cafes; gentle, waiting patiently next to the chair. At a veterinarian waiting room with other dogs, no problems!
Eating, he is protective of his bowl, so we fed him in a separate room. When he's done the bowl was removed. (Why protective? In the first shelter they got fed every 6 days... you'd be protective of your food too!). Once we learned these habits, we easily adjusted him and our envitornment to counter the undesired behavior.
Veterinarians; reacted to the stereotype of a Pitbull mix. They immediately wanted to muzzle him and treat him like an "aggressive" dog. In some slight ways, this was a self-fullfilling prophesy. His reaction to being restrained and presented with a needle was learned from his past. (Why? Dog catchers caught him with 2 ropes and pulled in two directions while one pulled him up by his tail to demobilize and lift him up. We have pictures of this... imagine it would leave a permanent memory with him, not a pleasant one! He had been really baddly treated by some veterinarians.)
We went to another veterinarian to give him a shot. Sadly this veterinarian was so scared of this small 10 kg Terrier and started to wrestled with Giove while yelling excitedly. I tried to explain why and how we wanted him to be handled, but this male veterinarian wrestled and yelled, "Do you know this is a dangerous dog?!"
Giove is now at his home in Sweden, getting aquainted with his new mates, a Mastif and Rhodesian Ridgeback. Why the couple drove 22 hours each way to pick him up rather than flying him? They wanted to have some time together with him, to get to know him before he would meet the other two kids. 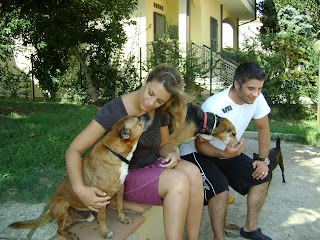 This is a wonderful couple who have great experience with terriers and dog psychology/training. I would never allow a dangerous or unstable dog into somebodies home, not even my own home. We have had to put down very few dangerous dogs, sadly not their fault their behavior was created by humans. I work for what is best for the dog. Giove, he won a place in Paradise. Good Luck my friend, you did it my "mini-Mandela."
Posted by Mother in Action at 2:08 AM