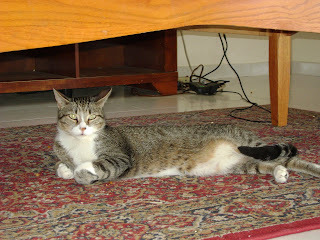 Animals Without Limits received an email from a family that wants a solution to their cat problem. They have kids, they have had this cat that they adopted from an animal organization here since he was a kitten, nearly two years ago.
The problem is, the cat is swatting the kids and sometimes the adults. Of course, this is not working. They term the cat "aggressive"!
They had contacted the animal organization who adopted them the cat. Two persons in the organization advised them to let the cat out... just abandon it.
quote "suggested releasing him as he could not be placed in a home due to his repeated aggression" end of quote

This cat is an indoor cat, if he ends up on the wrong side of the balcony door, he scratches and wants in again. The veterinarian gave the family Animals Without Limits' email and told them to contact us.
We are pleased that this family contacted us, and that the veterinarian advised them to do so.
Animals Without Limits' veterinarian has now encouraged and provided advice for the family.
This cat that has been an indoor cat his whole life would probably not survive outside. How is he going to get food? He has been handed food his whole life! Scared of new noises, and objects.
Even if he is having a naughty, "unacceptable" behavior, he will miss his family and will never understand why he got abandoned? There is always a reason to an "unacceptable" behavior.
This is a serious problem when advice such as this, from "animal professionals" is provided families that already don't see many options to solve their problem.
Keep your fingers crossed for this family, and their cat who is having a problem with something in his life. AWL will seek to find the problem's cause, as a way to find a solution.
More later! Is he aggressive?

As a long time cat keeper of truely unique cats here are two behavior methods that have worked for me with a few fly swatter cats (what we call our indoor wanna be hunters). The hardest part of rescue cats is that some just have so much of the hunting needs in their system, something they will always have. Your trick is to help find ways to satifsy the cats need to hunt, right now it is your family's movement. Think of how cats play with a mouse they catch or ever watch a cat hunt a bird. Using those thoughts try finding ways you can simulate that at home. Using a toy on a string tied to a stick that allows the cat to hunt can often help get the need to swat at things out, they also make ones that hang from door handles. Tye a crumpled up piece of paper on the end of a string and play mouse for kitty. Our cats always of course prefer our tempting them with an item then pulling it away, so they can simulate hunting out doors. If after a lot of play with the stick does not work. A simple squirt bottle and a quick spirt of water, meant to startle the cat, not soak them, can help.

Thank you very much for your comment and advices. I will forward this to the foster family.

An update on Tiger will come.