GEORGE IS FINALLY AT HIS 5 STAR HOME 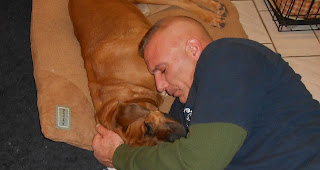 What a trip! What a story and what a great family!

As you have seen on earlier postings, the rescue dog George "unlucky with a lot of luck" (?)

He was found nearly starved to death in Southern Italy, with 40-60 ticks all over his body, broken leg and hip. Family Funk brought him in to their warm home and helped him back into life and love. A couple of months later the Family Mattsson-Mercer drove him up from Italy to Germany and noticed later that  he had some other problems. Veterinarian Martina did x ray, and ultrasound. It showed that he had stones in his bladder.
George rested and got medicated at Mattsson-Mercer home for a couple of weeks. Until yesterday (Sunday) 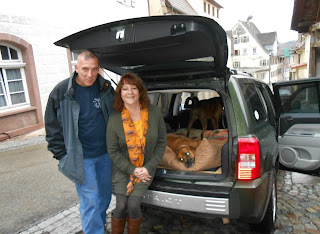 His lovely family, Jacquie and Nato Mike with their love Boxer Bella came down to Stuttgart and picked him up. They are warm and genuine people with their hearts and heads on the right places. 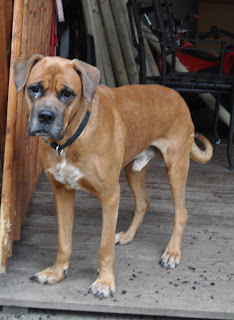 George we are many that will miss you, but we smile when we read your updates from your new five star home in Germany.

That's Amore.
Posted by Mother in Action at 2:29 AM