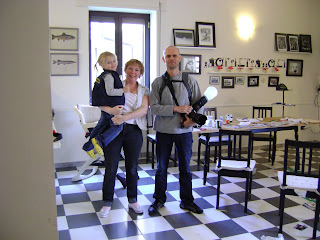 Journalist Anna, and Photographer Per were on an assignment for the magazine "Harliga Hund" (Wonderful Dog--Bellissima Cani) from Sweden. A wonderful and professional team that also had to babysit the director's children who suddenly went monkey-crazy during the interview.

Animals Without Limits puts all its time, energy and resources into its mission. All staff, including the Director, are unpaid volunteers. So everything, including interviews, have to work around the real-life things, like babysitters canceling 15 minutes prior to when they were supposed to arrive, and husbands being away on business trips. Sometimes, it all happens at once. Like this day.

In this case, it never turned bad, it became a nightmare.....the children were everywhere, whining, fighting with each other. "Could this be my children?" wondered the director?


But a big THANK YOU to Anna and Per, who did a great, profession interview in less than professional circumstances. AWL liked you a lot, you guys got Amore charisma, and did a fantastic job. Perhaps we could do it again, on an actual AWL mission (and without the children??)

Followup: As these things go, the kids both slept for three hours after the journalists left, and four hours later Olivia, the oldest, was in the emergency room at the hospital, very sick.

Posted by Mother in Action at 1:07 PM