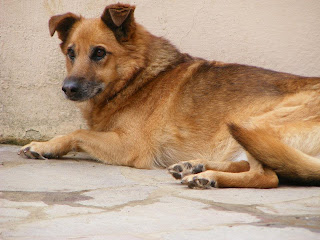 A couple of days ago I was down working at our hospice in Southern Italy. My last day, I took some clients with me to Dr Damiani´s clinic. Dr Francesco examined our Amica since she seemed to be in pain. Amica previously had been a very happy stray with her friend outside a food store named CONAD for many years. People knew and fed them and kept an eye on them, too. I remember three years ago when AWL started in Italy, a veterinarian and I stopped to check on them because earlier had I seen a wound on one of the dog´s ears. Suddenly, out from CONAD strode the store manager holding his two arms in his side asking what we are doing? The veterinarian spoke fluent Italian and told him who we were and that we only wanted to make sure the dogs were doing fine. He nodded his head that we could go ahead but he watched every move we made.

The parking guard who watched over the dogs was very friendly. Every time I went in to the store I bought them each one dog pate. We were allowed to feed them if we walked away from the store and fed them at the parking area, he showed me where. These two dogs were chubby; well fed by many and content.

One day after XX months I received a text message from Martina, that the dogcatchers had taken Amica, the older female. Someone had reported she had cancer and had to be removed from the streets. We had to get her back!

I said yes, of course.

Pio drove to the dogcatcher and veterinarian station, and told them about the hospice. We would take care of Amica. If we assured that we would medicate and re-wrap the surgery wound on her leg she could be ours, but we had to come later and show her to them to prove that she was doing better. Pio came to the hospice with Amica and all her medications. Twice a day I wrapped Amica´s leg, it was always a struggle, she was slippery like an eel. But she never did anything to harm us, never growled. She got her own room on the second floor, and it was a victory the day she walked down by herself and out in the grass to do her business.

She was always quiet and beautiful-her squirrel-like eyes always looked at you very intensely and seemed to be questioning if we could be trusted?

Fast forward to the second weekend in December: Dr Francesco examined her and felt big lumps, he could tell she was in discomfort, just as we imagined. X rays were taken and it was with misty eyes I could see, she had big tumors and skeletal cancer. Her time had come to cross the Rainbow Bridge. Even if that is what our hospice is about ---to give them a wonderful time before they start to suffer ---it is always painful to make the decision and to say goodbye.

You need to be a certain kind of person to be able to do this type of work --- to be there when it is time, and make the tough call. But at the same time we are happy that she didn´t have to die under a car on a cold day, suffering. Or, at a dogcatcher’s shelter in a cage on cold concrete floor with a lot of desperate barking around her. Instead, two of her old friends were holding her paw when the eternal sleep was put in. Very calm and no pain, her former street friends were waiting happily for her arrival across the Rainbow Bridge, where the grass is green and lush, and no dogcatchers or concentration-camp/shelters exist. Because That´s Amore.

She will be missed by many, and those who loved and took care of her.