CRY FOR HELP- VISITING A NEW (TO US) SHELTER 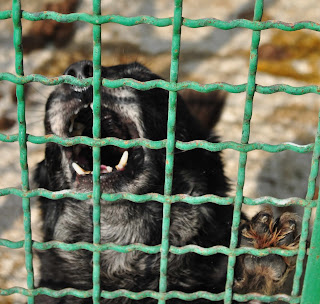 400 (+/-) dogs. A few dozen cats. 6 rows of pens.... about 30 pens in each row. Concrete reflecting the Italian sun into the dogs's cages. Endless barking. Endless soul-wrecking monotony. Food and water, but no exercise outside the cage. No mental stimulation. Each day like the one before.

Wouldn't you cry for help, too? 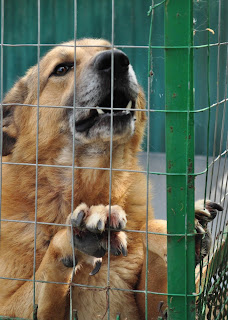 Could you keep your dignity, not to mention your sanity, if you were locked in to such an environment? No end-date for your release, yet the forlorn hope that maybe, just maybe, your forever family will come through the gate and pick you... today? Tomorrow? 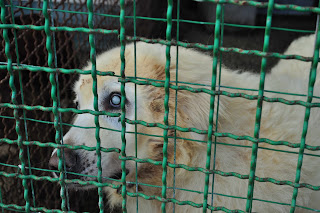 How long had this boy been there? No one answered. Long enough to go blind in both eyes. He knows his cage... every inch of it. He can no longer see the outside world, no longer can see at all. But in his mind, he remembers the family he once had. He remembers running in the grass and playing with "his" human-child. Will they come back for him finally? His longing fills the days and nights with a dull pain of loss and regret for a "crime" he didn't even commit. 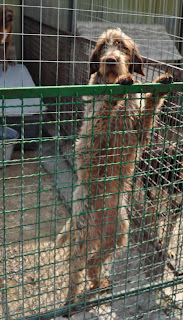 He was bred to hunt. Well, at least some of his bloodline was. But he's also a familiy dog by temperment. He'd love to run with you on your morning or evening jogs, or just lay by your feet as you read. He doesn't need much to be happy... just a human to take him away from here. A human to scratch him behind his ears occassionally, and who will smile when he gets a gentle lick on the hand from his "buddy".

So, each time a new human comes to the shelter, he stands up to greet that human; to be on his best behavior to impress the possible forever-master. And each time the human comes and goes without taking him with him, a little bit more of his spirit dies. But, there is always tomorrow. Maybe you will be the one to come and restore his faith? To bask in his unconditional love? Tomorrow? 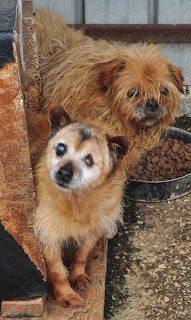 They are buddies in a pen with 3-4 other dogs. All smallish. They get along well, but their world is so small. They need exercise, they need to be stimulated by something other than the barking of the other, bigger dogs to their left and right, to their front and rear.

The littlest one is old now. He lost his left eye some years ago. His little legs are stiffer now. On the few cold nights, these two huddle together for a little warmth, the chill taking its toll on their souls and bodies.

Their lives shouldn't be like this. They were both somebody's birthday or Christmas present. But something changed... a move, a divorce, maybe the humans just got tired of the responsibility of having a pet, and forgot about their committment and the unconditional love these guys gave.

So, now they are here. Huddling together against the wet and cold, panting in the heat. Longing for the families they used to have, and aching to have again. 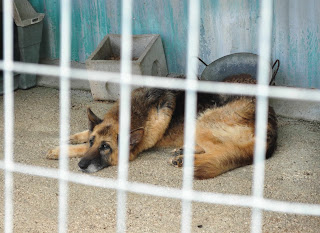 This old soul appears to have about given up hope. Sure, his physical needs are met, but what about his emotional well-being? He's surrounded 24/7/365 by 400 other barking dogs. German Shepherds are very sensitive... imagine how it is for him!

Maybe he had a family once. Maybe he was abandoned when he grew up from that adorable puppy they impulsively adopted? Maybe they moved and didn't take their "friend" with them, leaving him to fend for himself at what used to be their home? Maybe he was a guard-dog at some warehouse, kept thin and hungry in the belief it would make him guard better. We don't know.

What a great companion he would be for somebody who doesn't go on runs or is very active. Maybe a slow walk every now and then... together. His heart would sing with joy to have such a life after all he's been through. 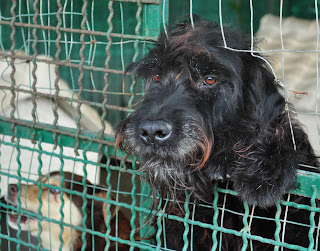 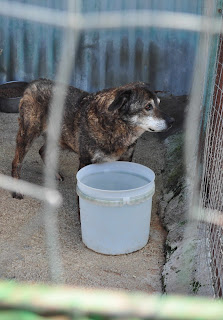 He's lucky to have a clean bucket for his water. At too many other shelters, you'd find algea and urine in the bucket, or maybe no water at all.

Animals Without Limits is begging... BEGGING... for help to bring to these kind, trapped souls. A bag of food, a box of Frontline, some money, some time to come and give these animals a little much needed love and human contact. We are not an adoption agency, but we will certainly help facilitate adoptions for good, solid "forever" masters and families.

Amore doesn't let their amore be in vain.

Are you orgazing a "shelter" day here? If so please let us know. Thanks.

Thank you for your interest! Where do you live?

We live in Casal, not far from licola at all.

Can you send me an e mail info@animalswithoutlimits.com