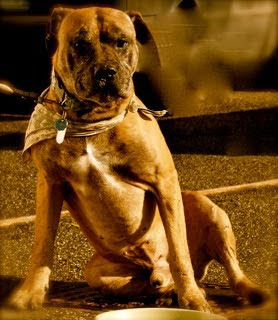 We wrote about these two Mastiff/terrier mixes earlier. Apparently former fighting dogs, that were living in an abandoned car. Rescued and bought to Rita's garage and I made a visit. Steven, a good guy, wanted to adopt them and spent time with them in the garage. He will have his house ready in a week (he's just getting here to Campania). 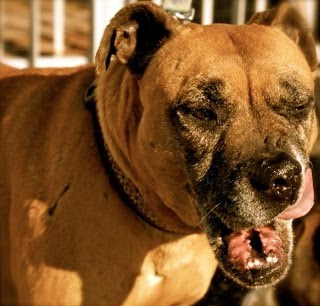 Initially, everything went well with this married couple--but I had a feeling that they couldn't be adopted together, despite the appearance of them being "together". And yesterday we found out why. They were given a bone each and that caused a fight between them that the female couldn't get past. When I came to the place they are staying, the energies were vibrating high in the air, from both people and dogs. 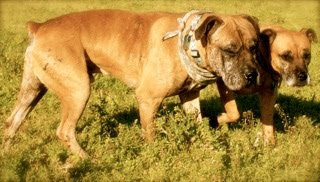 After that fracas, no one dared to put them together in the garage again since the female snarled everytime she saw him. When they fought, he held her down gently, without biting, but when she was let up, she attacked him again.

After a sleepless night for many involved we joined up today to talk about their future. Understandably, Steven was afraid of coming home to find one of them dead, and the female she had strong character. Wonderful without the male....

We tested them outside, both on leashes. Out of sight from each other, they were attentive to the human in control of them, and clearly affectionate toward Steven. But once within eyesight of each other, she was growling and he was whining. In the car on the way to the Veterinary Clinic, she was in a crate, and was quiet. He was all over the crate, not agressive, but wanting to be with her. He even squeezed himself in between the top of the crate and the roof of the car.

Steven will keep the male, they bonded right a way and he feels comfortable around him, and that is the most important to be honest so that we can solve for future of the female. It was heartbreaking, I will admit, because we feel like our human intervention is causing this aggression where once they lived together. Apart, they (really she is the "problem" in this situation) are fine and should be loving companions. But together, they will always be a ticking time-bomb at best. On discussion, we all felt that it had to be like this. She would never survive on the street, that breed will be killed right away. 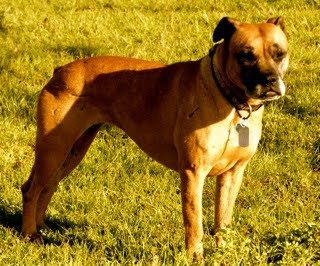 I had to find a place were they could be spayed and neutered and at the same time be kenneled for observation, and while waiting for the vaccinations.

At the Veterinary Clinic, we took first the male in for his examination, and he was such a good boy. 31 kg, full of fighting scars and not many teeth. Around 4 years-old. He didn't blink when they gave him the shots. Absolutely amazing his trust in we people, after what he has probably lived through. Dr. Lorenzo did a great job with this brute of a dog.

Next, we brought the female in. She's also wonderful, young, probably the same age. Again, not many teeth, and her hind quarter was full of scars (yet not many around her head, and her ears are completely without marks). She was also very good in the clinic. And once again, Dr. Lorenzo handled this dog with authority but compassion... neutralizing any instinct the dog may have had to attack or nip at any of us. Dr. Lorenzo's a tough, but caring guy... perfect in this situation.

The female is up for adoption. She is very dominant to other dogs. She gives warm kisses but needs a strong, secure hand. She probably shouldn't be in a home with children. She can be wonderful with children --- we just don't know, but we wouldn't want to take that risk. This is not a dog for "beginners", she needs somebody used to dogs, and preferably used to the stronger dog breeds. Like Dr.Lorenzo said about fighting dogs, they are good around humans but get triggered by other dogs [or cats, there was one brave cat that was peeking through the window getting them both worked up].

Is there anyone out there with tough-love inclinations that want to take on this rescured girl? Steve named her Athena, and we think the name fits. She will be a great companion, but will need a firm hand along with the open heart.

Posted by Mother in Action at 3:50 AM

Dearest Mia,
I would like to thank you for this morning and for the past days too.

Thank you for running here when we needed help. It was such a comfort to have you around, to see you dealing with the dogs and us too. Thanks for lending and driving your car, when we had to pick up the boy.
Your commitment is remarkable, but most of all a true inspiration.
And I am so grateful that you ended up here in Naples. We are so in need of help here, not only the dogs unfortunately, but the people too.

The welfare of animals should not be left at the mercy of generous people (thank God there are some), instead should be the goal of every civilized society. It's not the case of Naples. I was born and raised here, my parents taught me to feed and respect stray animals, but I was never comfortable to see them living miserably in the streets. I wish my city took ownership on the matter of strays and educated its own people. I wish my city gave us a chance to bring out the best in us.
God bless the soul of all the Italian volunteers and you, for doing such a wonderful job at showing us the true meaning of COMMITMENT. Especially you Mia, who are giving so much of your time and efforts, and your amazing people in Sweden, who with their contribution and compassion set such a great example for me!

Thank you for Doby too: for the Frontline and for the de-worm medicine.

despite all the positive comments and feedback that I gave you on our way back home yesterday, I still feel under pressure for this situation. And since I have nobody to talk to, including my husband, as you know he is in the US for 20 days, I have decided that from now on, I will start writing about Anastasio (at last he has an official name now, and not just boy anymore) and our relation as a form of therapy.

I just found out that his adopted Dad Steven will have a place where to stay on the 5th of March and not on the 25th of Feb. as I had hoped. Ouch!!!! 15 long days with Anastasio, locked in my garage, and four more dogs in the house, separated by a door " Boy this is not going to be fun!" I feel like I am leaving in a Fire Station, without the proper training to put out the fire in case of an emergency. This is actually my biggest nightmare! that he may get out and hurt one of my dogs.

I took him and myself out a couple of times today and let him off his leash in the field by my house. Well guess what!?, he doesn't want to run. If I walk, he walks, if I stop, he stops...ooookey..."GO BOY, RUN, TAKE OFF" no invitation works. Is he afraid that I may abandon him?
Soooo... I am afraid of his muscles and of his trained mind for fighting and he is afraid that I may "ditch"him? So who's more scared here?
I observed him walking by my side today and I was/am fascinated with his body. Anastasio is truly a powerful animal. I saw him jumping and he is spectacular, he may be sturdy looking, but when he bounces, he looks as light as a feather...just don't jump on me dude!!!

But back to my challenges. This morning I found out that he doesn't like the rain. Hercules doesn't want to get wet? What a revelation...I had to pull him to get him out of the door! He's strong! I wish I could walk him out of the gate, but then again, I tell myself, "Rita if this dog, who is now so gentle when he walks on the leash, decides to take off, you will end up with your face in the mud.

Today he DID NOT WANT TO GO BACK IN THE GARAGE, I heard him growling!? when I pulled him inside. My heart jumped...is he going to devour me? He obviously didn't. I don't think it was on his agenda. Anastasio doesn't like my garage because Anastasio hates being alone; he sits right outside my door, I can see his shadow through the glass. So I put down a beach towel and a blanket for him.

Yesterday I cried so much for him. I hate the idea of him being lonely and that he may not have a friend to play with anymore.

Well that's it for now!

Rita, I found your wonderful posts now, thank you so much for your words and your "journey" and I wish we could do everything different. You are a strong person and I admire that you are not giving up on either...that is huge. Since many backs away and that is frustrating....We will make it, I promise you that.