GOIVE OUR HERO AND MAGAZINE BOY 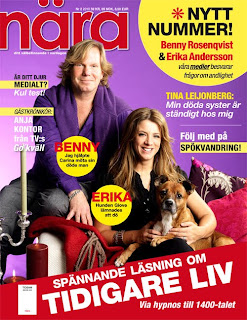 Look at beautiful Giove from Italy! Never would anyone in their wildest fantasy have guessed that this dog, Giove would be on the cover of a Magazine together with his beautiful owner Erika.
Giove was rescued from a terrible shelter, (Giove is on the video with two ropes around his neck) put in another shelter, then in a kennel, and then in my house for a couple of weeks so his new family could come down and get him. He went through so many different tests. And he solved everything under our observation with big verve and great heart. I even took the magazine with me today when visiting the dog catchers they were the one providing us with Giove's Passport.

In this article you can read about Giove, that we called Mini Mandela --how he survived and fooled death many times. Even up to the end here in Italy, some of the veterinarians warned us about him....He never did anyone any harm, not even growled. He has never made any accidents inside their apartment, and with children he has been wonderful. He moved in with Erika and husband Bobby and their two woderful dogs, you can follow Giove's own blog.


Also in the article you can read the message my daughter delivered from Erica's dad, who is on the other side, that gave us "positive" goose bumps.