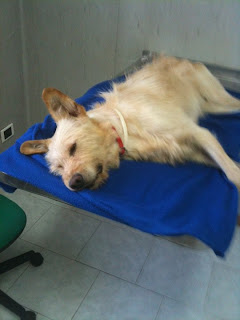 Our beloved Julian, also known as Benji, is now free to run with the wind across the rainbow bridge.

Julian is one of those heartbreaking cases we come across too often here in Campania. He was found beside a road, seeming to have been hit or suffering from disease. After much testing, we found he had a rare virus affecting his brain. Once we identified it, we found we couldn't cure it, but could likely treat it.
He was in a great foster home, with some other dogs, but kept having seizures that would have us running with him to the vet clinic, where they stabilized him. This happened pehaps a half dozen times.
He was blind in one eye, and sometimes had trouble getting around, but after a seizure and treatment, he was a happy and fairly normal little guy.
What struck all of us about him, was how he seemed to come alive when someone petted him, or showed him any affection at all. He had a true, big, and pure heart. Life dealt him a awful hand, but he enjoyed each day he had to the maximum of his ability.
Yesterday, he had another seizure, and again we took him to the clinic. Both myself, and the veterinarian (Dr. Loungo) agreed that all that could be done, had been done, and it was time for Julian to cross over the Rainbow Bridge. With tears in our eyes, we helped him out of his pain, and on his way.
You will remember that I recently also said goodbye to my dear Tjojs, the dog whom I adopted in Sweden, and was with me for 14+ years. While I mourn her deeply, in many ways I mourn Julian even more. Tjojs had a full, wonderful and varied life. She got to do and see so much, and together with me we grew, loved and learned from each other. Julian had such a short life, yet such a big heart. He deserved so much more and better than what he got. Any soul who could thrill to just a little affection from a stranger like he could... deserved so much more.
Farewell, Julian. We will miss you deeply, and will try to embrace what you taught us in your gentle, simple love-of-life. Perhaps you will wait for me across the Rainbow Bridge?