THE DANGER OF TRUST THE WRONG PERSON

I had been asked to go out to a small shelter out on a field to have a look at a sick dog. While there we found out that there were two dogs that been abandoned by an American lady. We were told she had tried to put them to sleep. Horrified, I got the tags and went on a two week hunting expedition, its not been easy since many are careful of reveling names or get into trouble if this was true. No one wants drama, or to be involved. I found out the name and one of our fantastic volunteers Tammy got hold of her. 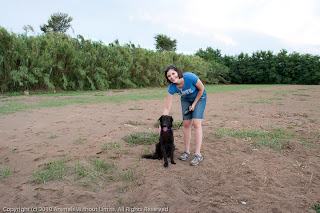 She became devastated when she heard that her former dogs were in a shelter. She wanted them back! A "friend" (she is getting interviewed tomorrow) had said she would help her adopt away the dogs. The owner could not keep them since she was probably going to be deployed, and her landlord had complained that they were barking a lot.
This "helpful" person took the dogs and gave them to an Italian animal worker, telling them that these dogs were put on "killing schedule" by an American. The Italian's became mortified, with all understandable feelings, and put them in one, then another shelter. 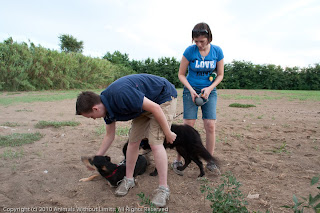 Today , I was able to go out there and introduce the "owner" back to her two dogs, Frankie and Lilly. These animal volunteers who have cared for the two dogs, I can understand that they are still afraid that these two dogs will be deserted again....who is telling the truth?
Rebbecca was very angry to find out what she had thought was a loving new home for her former kids, were instead on cold concrete floor in a barren field, away from a warm home.
Keep your paws crossed that this will work out, since Lilly and Frankie can not be apart from each other. And Rebbecca can only keep one.....
Posted by Mother in Action at 10:32 PM