MY COLUMN FOR THE MAGAZINE NARA

Animals do not Fear Death

(You can read my column in Swedish here, Tidningen Nara

Death may scare most of us humans, but it does not scare the animals. For the Other Side and Life are the same for them.
Life will never end!

I have never experienced the Other Side for us humans. But I took part of the "Animals" Other side ones. The strong experience happened to me in the early 1990s and since then it has always comforted me when I work with sick animals.

In my first book, "Listen When Animals Speak" (Forum 2000) I wrote about my experience. At that time, I went to a masseuse who also worked with Body Harmony. That made me curious. "You can experience the past life," said the female masseur to me. I did as she said, but without much expectations. I breathed deeply and directly everything felt very pleasant. I just was!

Suddenly, a black and white muscular stallion cantered behind my closed eyelids in full figure. He was handsome and proud and had enormous charisma that gave me security and confidence. The stallion had control over all the other horses cantering around and finally they gathered behind him. They were all in a valley where the grass was green and juicy, and I saw everything so clearly, even dewdrops on each blade of the grass!
I had never seen such a fantastic green grass before. The colors were magnificent and there was a great calm. The horses cantered past me and finally came Sigge, my horse that I had been euthanized a couple of months earlier. I could feel his presence so strong!

When I opened my eyes, I was totally confused and almost in a small state of shock. It had been like for every thought I thought, it became as if my eyes were zooming in like a camera lens. Everything was so peaceful and beautiful, that I wanted to go back there again. I longed!

I realized that life is not merely a loss, death and grief. There is a reason for everything, even death. A new door opens for those who leave the Earth, but also for those who remains.

A Labrador communicated to me just before she left her Earthly life: "We give you our whole heart and love, regardless of who you are. We give unconditionally love to our owners, as to all others we meet during our time on Earth.
In the life time without any end! " 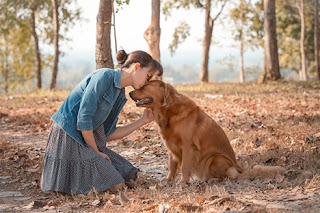 picture Shutterstock
Posted by Mother in Action at 4:42 AM