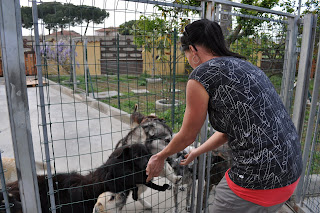 We were out driving around, showing them "the not so good areas." We passed a house when I heared Milla say, "Look, there are as many dogs as you have Mia in your home."
We stopped and got out to walk around when a polite older man came up to us and greeted us. I love many of the people here, they are so generous in their hospitality. He invited us in and we were so impressed by how he was keeping his dogs. So clean and so nice. (He is also a person who builds and invents.) 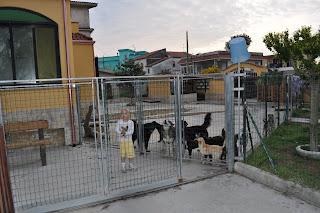 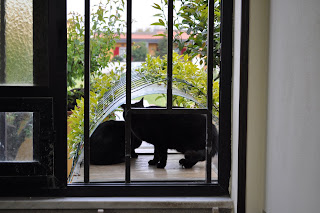 For his cats, he had made a beautiful passage for them to run through from the inside and out (or opposite) This was completely a haven for both cats and dogs, and for us too. We didn't want to leave either.
AWL donated some bags of food and right away the man said he wanted to give a bag to a lady with a lot of animals. Would we go with him? 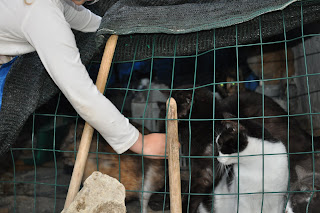 The lady was very kind and kissed while invited us in. She picked beautiful flowers to us all and gave Olivia a present. We saw a blue cover with big rocks on it. It was silent but we sensed that something were laying under the cover. I told Olivia to open up (lady didn't mind) and several cat faces looked at us with curious eyes. I asked how long they had been there, and she answered me four (4) years. She didn't want them out since she had a big Rottweiler on the backside that had already killed four (4) cats! On the other side of her gate were ten (10) cats peeking in, and we wondered why she didn't let the locked in out on that side. She was afraid they wouldn't return, then she was afraid they would scratch her car. The man tried to give her solutions but she argued against him the whole time. He turned to me and said "She has a good heart but a bad head!" I knew what he meant and giggled a little. I had seen so much bad things happen to the animals on the outside and many people trying to protect them. Yet, sometimes the reaction of people "with good hearts, but bad heads" became animal neglecter in its own way. 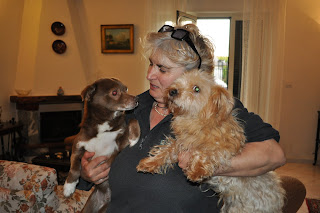 She had more than 20 dogs locked into a room and we were not allowed to see them. She took out two (2) sweeties but we suspect they had kennel cough. We really would like to help this woman with a volunteer veterinarian who could help visit and treat all the animals. AWL would pay for all the medicine.
You knew she wanted what was best, but sometimes love can harm more than cure. We really want to help her in a way that is possible. Any volunteers?